You want to know more about smaXtec?
Send request now!

In the previous article on mastitis, we took a closer look at causes, symptoms and diagnosis of the disease. This time, we will focus on the impacts on operating efficiency. We then go on to explain how smaXtec helps you detect and treat mastitis at an early stage.

In areas of intense milk production, mastitis is the greatest loss-making disease complex. In many countries, udder health problems are, in addition to fertility disorders, the most common reasons for premature culling of cows.

In cases of clinical mastitis, the increased costs are due to:

In cases of subclinical mastitis, the increased costs are due to:

An increased workload means in detail that the estimated working time per cow with severe clinical mastitis is about four hours. The costs are divided between additional expenses for cleaning and interim disinfection of the milking equipment, extra equipment for cleaning, loss of milk due to discarding, treatment and diagnostic costs and additional handling of sick cows. Reproduction and associated costs are also clearly affected. For example, the risk of early abortion is an issue often mentioned in this regard by specialists. In cows that develop mastitis within 45 days of artificial insemination, the likelihood of miscarriage is three times that of a healthy cow. In addition, the conception rate drops significantly. The conception rate for cows suffering from mastitis within 30 days of artificial insemination is only 38% compared to 46% in healthy cows. [3]
Subclinical mastitis causes significantly higher cost because this form of mastitis occurs 20 to 25 times more often than clinical mastitis. [1]

The following diagram shows the distribution of costs using a dairy farm with 50 cows as an example. You can see that the highest costs are caused by the reduced milk production and the additional costs for remounting (almost 90%). [2] Specialists often mention, that one case of clinical mastitis can cost up to 500€. [4]

However, mastitis not only has financial implications but is also of great importance for the food hygiene value of the milk. Some mastitis pathogens are pathogenic to humans, meaning they can also cause disease in humans. In addition, antibiotic and chemical residues may be left behind by the treatment. It is, however, of course required that the milk is pure and is derived from healthy animals. [1]

It is widely known that smaXtec is much more than just a heat detection system. In addition to heat and calving detection as well as the measurement of drinking behavior and body temperature, our system also offers revolutionary health monitoring. This makes it possible for farmers to detect mastitis at an early stage, thus maintaining the well-being of the cows and reducing economic losses.

With smaXtec, you detect mastitis early: The increase of inner body temperatureis, as for most inflammatory diseases, the first indicator of a beginning disease. According to scientific studies, inner body temperature increases up to 4 days before clinical symptoms become visible.5 Since the disease is detected this early, you can act early in order to considerably reduce the number of moderate to severe mastitis cases on your farm.

Thanks to the continuous temperature measurement by the smaXtec bolus, the smallest temperature rises are immediately detected and you get informed automatically. As already mentioned, however, it is not only high temperatures that are signs of mastitis, but also loss of appetite and not being able to stand up. smaXtec can detect many of these signs with the help of activity and water intake monitoring.
Numerous smaXtec customers benefit from these measurements and have been able to detect mastitis at an early stage. The following two examples show how smaXtec detects mastitis: One E.Coli mastitis proving how early smaXtec notifies you, and a mastitis that occurred shortly after calving which was detected early, but unfortunately didn’t lead to a timely reaction.

Mastitis caused by E.Coli bacteria frequently have a severe, highly acute disease progression. E.Coli mastitis often leads to the loss of the affected udder quarter or to the animal’s death. This is why it is particularly important to detect E.Coli mastitis as early as possible so you can react as quickly as possible and increase animal welfare.

Inner body temperature changes earlier than other parameters used for mastitis detection. This is the reason smaXtec is able to provide mastitis information earlier than milking systems. See for yourself in the following example: This cow had a case of E.Coli mastitis on the 12thAugust. smaXtec notified the farmer at 9 pm. He immediately examined the cow and took action. The milking system notified the farmer on the 13th August based on the changed conductivity of milk – more than 6 hours later!

The severity of disease progression in case of E.Coli mastitis leads to considerable differences between two milkings. In this case, there were no signs of mastitis during the last milking – they only occurred afterwards. Signs of mastitis were thus only detected during the next milking. This delay can be fatal, particularly when it comes to E.Coli mastitis that requires rapid action to save the cow. Once again, it shows the high value of continuous measurement of inner body temperature. 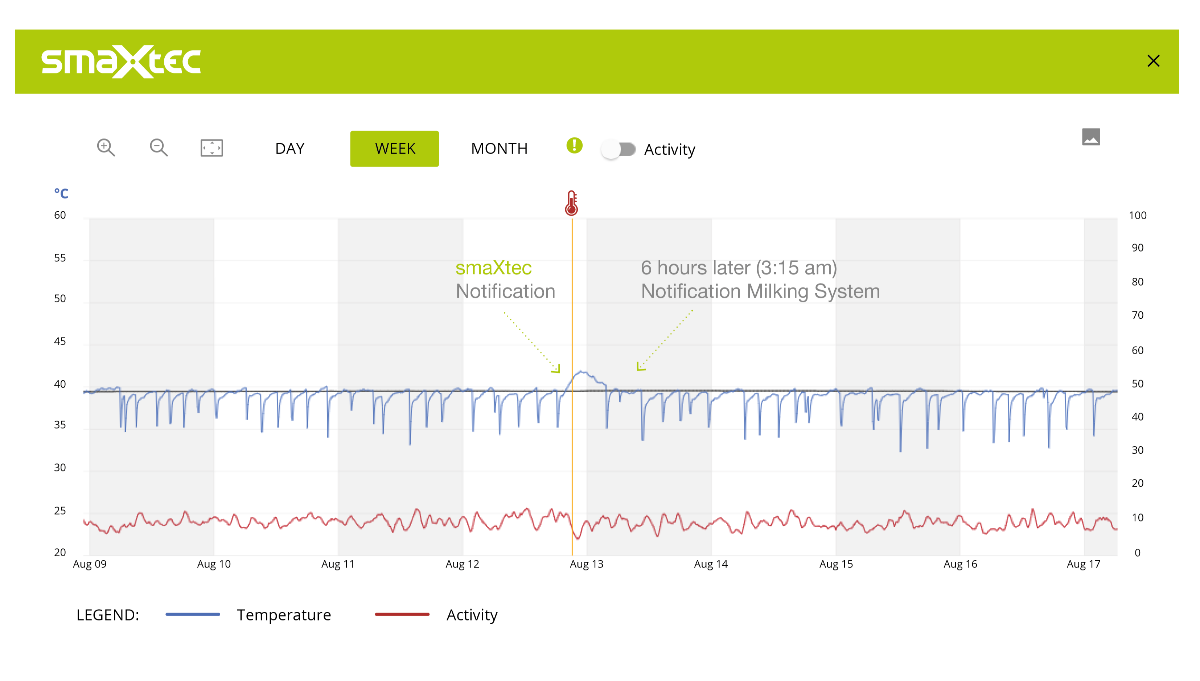 In this case, the farmer reacted as quickly as possible thanks to smaXtec, and was thus able to avoid lasting damages. The cow recovered quickly: Looking at the drinking cycles you can see that the cow drank considerably more water on the 15th August. Today, the cow is still in the best of health and milk yield was only slightly affected thanks to the early reaction.

But what happens if farmers do not react immediately? The following example shows how early smaXtec gives the opportunity for treatment.

In the following example you see the changes of the cow’s body temperature caused by a mastitis shortly after calving. In this case, multiple alerts were sent before measures were taken.

As you can see, the system sent 3 increased temperature alerts. Clinical signs with flakes in the milk were only visible in the evening of the third alert, and this is when the treatment was started. If the cow is carefully examined after the first notifications by using a California Mastitis Test, the test already shows slight streaks. This leads to earlier diagnosis and treatment. In this case, the progression of the disease was severe; the economic loss throughout the current as well as the following lactation is enormous. The usage of antibiotics could have probably also been avoided if a reaction based on the smaXtec alert had taken place. Additionally, the cow’s pain can be relieved earlier and thus additionally animal welfare is being improved.

You want to know more about the revolutionary smaXtec system? Contact us today!