A change in body temperature is the first sign of the most common production diseases in dairy cows and is therefore considered the gold standard for reliable early detection. Continuous temperature monitoring with smaXtec allows you to detect diseases even before rumination decreases or external signs are visible. This head start makes body temperature by far the most valuable parameter you can use to monitor and ensure herd health.

Inner body temperature is the most important vital sign for dairy farmers to detect diseases in their animals. Especially in the critical phase around calving and in case of any health abnormality, the body temperature should be measured as a precaution. (1) smaXtec detects diseases reliably based on this parameter, because the most common production diseases on dairy farms involve a minimal change in body temperature as they are developing. These include high-risk and cost-intensive inflammatory diseases such as mastitis or metritis, but also metabolic disorders such as ketosis or milk fever, which can also have severe consequences.

Why is body temperature the best parameter for health monitoring?

In a scientific study in 2013, a team of researchers was able to prove that diseases such as metritis, mastitis, lameness and pneumonia lead to an increase in the animal's body temperature above normal. In doing so, the study authors were able to demonstrate that more than two-thirds of cows showed temperature elevations up to 4 days prior to the diagnosis of clinical mastitis. (2)

For reliable health monitoring of dairy cows, body temperature as a vital value is highly diagnostic, because it changes earlier than any other parameter used to monitor dairy cows. The decrease in ruminating activity often occurs as a result of the temperature increase, as a research team was able to show in a scientific study in 2007: For example, cows consume a lot of energy in their bodies when they get a fever - their metabolism increases by 13% when body temperature rises by 1° C. This energy deficit could contribute to a subsequent decrease in energy-intensive bodily functions such as rumination. (3)

Inner body temperature in the rumen is 0.5 to 1 degree C higher than a rectal measurement, depending on the lactation phase. However, it correlates with the temperature measured at other locations and is therefore particularly suitable for continuous health monitoring. With the unique measurement accuracy of ±0.01° C, smaXtec measures inner body temperature at this unique position with the smaXtec bolus around the clock and detects diseases as they arise.

If you want to learn more on what causes and consequences a changed body temperature can have and which advantages the continuous temperature measurement with smaXtec offer can offer you, read our blog article on the subject of measuring fever in dairy cows

How do you benefit from disease detection with smaXtec in practice?

The following practical examples use the temperature curves from smaXtec Messenger to show the advantage smaXtec gives farmers in disease detection.

This case study with the curve diagram of cow 785 on the farm of a smaXtec customer clearly shows the advantages of temperature monitoring in practice: 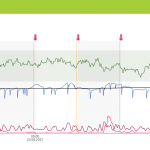 The smaXtec system sent the alarm ‘increase in body temperature’ in the evening of 22nd June, neither rumination nor the animal’s activity showed any visible change in the curve diagram at that time. In this case, the farmer didn’t react when the first alert was sent. The cow was treated after the third alert which allowed the cow to recover. Rumination did not change significantly at any time. Inner body temperature changes earlier than other health parameters and is therefore also essential for the detection of mastitis. In our blog post on mastitis and its economic impact, we show in detail how you can improve your farm’s success through early detection of mastitis.

Should a case of metritis occur in one of your animals, it is important to react quickly, as uterine inflammation can result in high subsequent costs due to milk loss and fertility problems. 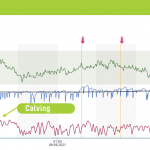 This example of a cow suffering from metritis shows the classic course of this inflammation, which triggers shorter episodes of fever. It is noticeable that several days can pass before the first clinical symptoms appear – in this case, rumination didn’t drop until 3 days later. With the temperature alarms from smaXtec, you can start looking for the cause of the fever much earlier: Metritis can be easily distinguished from mastitis by means of a California Mastitis Test and on the basis of the current lactation day, so you can quickly initiate treatment or consult a veterinarian.

Due to their feeding behavior, ruminants such as dairy cows can particularly easily ingest foreign bodies when feeding, which can lead to injuries and inflammation in the rumen. While hardware disease does affect the rumen, in practice there is still often an increase in body temperature several days before rumination activity decreases. Based on the curve diagram of cow 657 on the farm of a smaXtec customer, it is evident that the rumen bolus already detects a constantly increased temperature 4 days before the rumination alarm and triggers the first of 4 temperature alarms. With administration of a ruminal magnet, hardware disease can be treated well in most cases – as for cow 657 which was in much better health soon after the treatment. 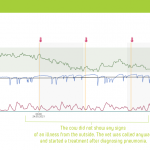 In pneumonia, subclinical progression of the disease is particularly common. If the symptoms remain undetected, consequential damage can have a negative impact on milk yield throughout the cow’s life, making pneumonia one of the most economically significant diseases in dairy farming. The practical example shows that first temperature increases are measurable several days before clinical signs. The persistent high fever triggered the alarm ‘increase in body temperature’ several times, while rumination initially remained inconspicuous – even a drop in milk can often only be detected days after the first temperature increase. Therefore, it is even more important to react quickly to health alarms and consult your veterinarian. In our blog post on pneumonia in dairy cows, we give a complete overview over follow-up costs per case of illness.

Diseases of the hooves such as Mortellaro (strawberry foot disease) or Limax (Interdigital Hyperplasia) are inflammations that can be influenced by a particularly large number of factors (barn hygiene, housing conditions, feeding, performance, etc.) and can therefore often only be brought under control with great effort once the disease has broken out. The case study of a cow on the farm of a smaXtec customer with early-stage Mortellaro illustrates that body temperature is a reliable indicator of hoof health. This is because affected animals react with isolated increases in body temperature up to 1-6 weeks before visible lameness. Therefore, in this early stage, when the alarm ‘increase in body temperature’ is given, the hooves should always be checked as well, to be able to treat a disease as early as possible. In this early stage, a simple grooming cut (pressure point relief) is often sufficient to prevent lameness. 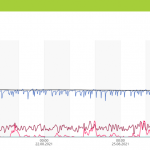 Freshly lactating cows are being closely monitored on most farms. But with a larger herd, the time required for regular temperature monitoring of the animals increases considerably. The complete documentation of the temperature curve by smaXtec helps them to detect even short fever episodes, which are all too easily overlooked, even if you measure fever 2-3 times a day. In addition, long-term temperature monitoring also makes it possible to detect diseases that develop at a later stage of lactation or during the dry period and transit phase.
If the temperature drops after calving, this may indicate a metabolic disease such as milk fever (parturient paresis), ketosis or abomasal displacement. You should also pay attention to the cow if her body temperature rises, as values above 39.4° C may indicate infection or inflammation that needs to be treated as soon as possible to prevent milk loss and failure. (4)
Temperature monitoring truly plays a key role in dairy cow health monitoring. External influencing factors such as heat and high humidity can have a strong impact on the body temperature and surface temperature of dairy cows - with negative consequences for the productivity and health of the animals. You can read about how dairy cows are affected by heat and heat stress in our blog post and learn how to keep an eye on barn climate with the smaXtec Climate Sensor.

Every proper examination includes a temperature measurement – or a look at the smaXtec temperature curve!
Mag. med. vet. Mathias Petermichl, Veterinarian at smaXtec

With intelligent health alerts sent directly to your smartphone or PC, you can detect diseases earlier and thus treat them early, resulting in:

You also want to use the smaXtec Health System on your farm and benefit from earliest possible disease detection?

The smaXtec Boluses pick up all health problems within the cows, it’s very early detection. It often picks mastitis up long before there are any visible signs, you get a temperature warning.
Longshaw Farm, Jeremy Clark, UK