Dairy farmer from the UK, 180 cows 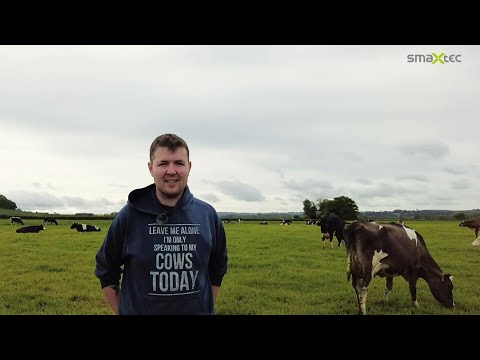 Robert Spiller is milking a dairy herd with 180 cows at South Bradon Farm in Somerset and installed smaXtec in November 2020. Since then, he has been able to clearly improve insemination rates and pregnancy rates of the herd. “The traffic light system for the serving of the cows is really effective. It let’s you know exactly when and what times would be most efficient for the cow”, says Robert.

Before, he was using a collar-based system to monitor the health of his all-year-round calving herd and had a lot of issues as the heat detection kept decreasing, which is why he was looking for a new system. “We now use just the smaXtec boluses and UNIFORM, mainly for heat detection and the health traits. smaXtec is really good to pick up mastitis cases, it’s two days prior to any clinical signs. And the heat section works well: you know when to serve the cows and it saves a lot of time looking for who’s bulling”, the farmer explains. Having previously worked with oestrus stickers, Robert’s family has been able to save a lot of time thanks to smaXtec, freeing up more time for work everywhere else on the farm. “With smaXtec, our pregnancy rate has increased due to more cows being served. We get a lot less empty cows up for pregnancy diagnosis, which means a lot less hormones are used and a lot less missed heats.”

“For fresh cows, smaXtec keeps us up-to-date straight after calving and anything out of the ordinary”, Robert reports. “The calving alerts are very accurate for when the cow is going to calve, so we know exactly which cows to look at and roughly at what times”, says the farmer. Robert explains how his farm is also seeing economic impact from improved health monitoring thanks to the smaXtec technology: “This has benefitted us, as we have less calf losses and more cows in-calf, which saves us money on insemination and, obviously, more calves to sell.”

“Anything slightly wrong with the cow, smaXtec is straight on it.”

Overall, Robert Spiller is very pleased with the improvement that smaXtec has brought to his dairy farm: “With smaXtec, we are able to pick up any high temperatures, mastitis cases or any rumination decreases straight after calving. It’s like a third eye watching the cows. Our herd is a lot healthier and it’s generally a lot more efficient with the smaXtec boluses. We’re a more profitable business with this installed – without having to employ a third person.”
View more testimonials    Get in touch with reference farm
Close